Susanne Whitley Honored as ConocoPhillips’ Math Teacher of the Month 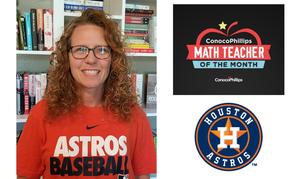 Congratulations to NIS' Susanne Whitley on being named the ConocoPhillips Math Teacher of the Month, in partnership with the Houston Astros.

TOMBALL - Northpointe Intermediate math teacher Susanne Whitley was recently honored as the ConocoPhillips Math Teacher of the Month for April.

Whitley is a fifth grade math and science GT teacher. She has served in education for 27 years and has been in Tomball ISD since 2005.

“Susanne Whitley creates unique ways to motivate students to learn math, including a zombie-themed escape room and a “Shark Tank” project based activity where students develop a business plan and budget to sell actual lemonade to community members,” said David Surdovel, Tomball ISD Director of Math. “She has served as a district curriculum writer as well as the current Northpointe Intermediate 5th grade team leader and campus technology integration leader. Her passion, ingenuity, and dedication serve as a model for teachers and staff across the district.”

Along with this honor, Whitley has been recognized for her hard work as a recipient of the Barnes & Noble’s My Favorite Teacher, campus A+ Teacher of the Year, and The University of Texas at Dallas Master Teacher Award.

“Susanne is one of those teachers that brings magic to the classroom,” said Northpointe Intermediate Principal Darrell McReynolds. “She creates lessons that not only challenge the academic mind but touch the heart of each student’s social/emotional needs.”

In addition to serving her students in math, Susanne is an Ironman Triathlete and has completed 6 full Ironman triathlons. She is a certified triathlon coach and hosts the “Run for Your Life” after-school club for students.

“Her involvement stretches beyond her classroom as she helped start an afterschool girl’s running club several years ago to emphasize the need of caring for their physical health as well. Susanne truly epitomizes the caliber of teachers we have in Tomball,” McReynolds said.

Whitley is Tomball ISD’s fourth consecutive annual winner, following Christopher Penny (CPJHS) in 2017, Haley Galyean (OIS) in 2018, and Allison Bearden​ (OIS) in 2019 and was chosen as one of six district winners from roughly 1,000 nominees.

ConocoPhillips and the Houston Astros recognize six math teachers during the baseball season. The winning teachers were selected by an external committee made up of representatives from academia, government and the non-profit sector.